Searching For My New Partner In Crafting

I'm not a professional seamstress. In fact, I consider myself a novice. You probably won't believe that since machine stitching seems to be one of the trademarks on my cards. Well, certainly I've been sewing for a couple of years, paper sewing that is but I just realized that I've been 'playing with this such a cute sewing machine toy' instead of really sewing. Lol.

This cute little machine worked really well, at least IMO. It costs me less than $20 (bought at Michaels with 40% off coupon). However, most reviews that I read on-line said the opposite.
Anyway, it's time for the machine to retire. It still works but I cannot have it to work in a full capacity, demanding it to stitch the next hundreds cards or so.

This next sewing machine is bigger in size and yet it's still a portable sewing machine. I tried to work it with paper but so far I haven't had any luck to find the trick to make it work. I cannot really blame the machine, after all it worked well for my friend whom I bought it from. She managed to stitch a sofa cover and many more. Very impressive!

I think it's just me: lack of knowledge and patience. When I found out that I need to put a bobbin underneath, I was puzzled. I threw the question out on twitter, why. The answers made me realized how silly my question was to them. I do appreciate their helpful answers though and won't stop asking questions as there is no dumb question, right? The reason that I was puzzled was because this is new to me. The little toy sewing machine doesn't have a bobbin underneath (see picture above).

Or maybe this medium size sewing machine simply won't work well on paper? It's not invented for stitching papers afterall. It runs too fast, doesn't give a straight stitching as I expected and I have to re-thread after finishing every single card.

I'd been eyeing my parents' sewing machine that they had it for years already. It was hidden on its built-in table where my parents put a pot of flower on top of the table, a sign that they don't use it very much. My dad occasionally uses it for mending purposes. They bought it a garage sale for CAD$14. Such a steal! It's Singer and it's a REAL standard size sewing machine. I always wanted to give it a try but I hesitated to do so in the beginning. I thought it must be harder to operate it than the little sewing machine I had. Bigger machine seems to be more complicated since they have more buttons and options to choose etc and such novice like myself, I just need a simple basic one.

A couple of days ago, I had the courage and decided to give it a try, especially after knowing that it can do zig-zag stitching (FANCY in my opinion, LOL), something that I've been wanting to do for the longest time. There is no manual but good thing my dad showed me how to use it. He's been very helpful. Plus, Youtube is very handy! Got to give them some credits for providing the tutorials. 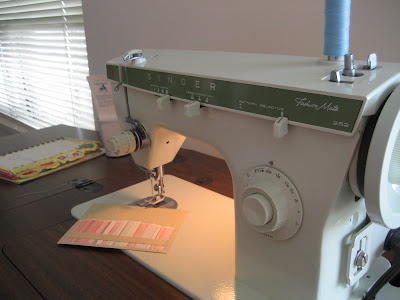 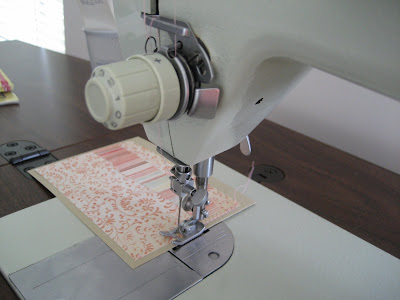 After a few trial and error, I finally could make it work to my satisfaction. Yipee! 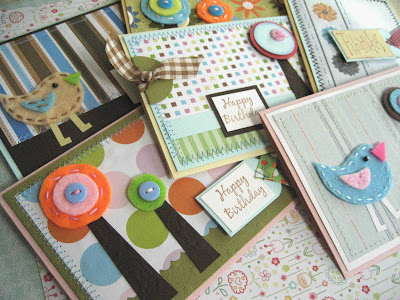 I LOVE zig-zag stitching. It gives a much more additional nice touch to my cards. So, expect to see more of them at my shop.

One of these new cards is listed on my shop. More will be listed soon as I finally found my new partner in crime :-)
Posted by Adorebynat at 8:34 PM