Oh how I want to be like Martha Stewart. Or perhaps to just have a tiny bit of her talents.

I can cook. I actually enjoy cooking! But baking? Well, I haven't had so much time to bake. I'm talking about baking some cakes. Cooking is more a daily chore which I have to do or my family won't eat. Lol. While baking, on the other hand, is something that I don't do much unless I feel of doing.

For Ethan's birthday, I planned to bake his birthday cake. I chose to make cupcakes because I thought that's the easiest to make. Plus my Mom gave me this cupcake recipe book recently and I really wanted to make a use of it. As you know, we just moved in to our new place. I didn't even have all the basic tools and ingredients, i.e. baking pan, cup measurement, flour, butter, chocolate, icing sugar etc. I had to borrow baking pan and cup measurement from a friend who happens to be a neighbour. Unfortunately (or fortunately?) my plan changed in a last minute. We had to meet some friends the day of the party. Long story short, we decided to buy a cake and bake the cupcakes on another day since I already had all the ingredients.

So...a few weeks after that (you know, I had to make the time) I baked cupcakes. And they turned out like this (below).

Hahaha, laugh as much as you want :-) I know what I am getting into by posting this. When I took these pictures, DH asked why would I take pictures of them if they turned out bad. I said, well, I am not only sharing my beautiful cards but also my failure in baking cupcakes.

Anyway, they raised for a little while and then sunk. Agrr. I googled and found a few things that can cause the sinking. It could be the temperature that wasn't stable. It could also mean that I need to leave it at the oven a bit longer. It could be that I beat the mixed it too much or too little. It could be that I filled the tin too much of batter not leaving it enough room to expand. It could be that they didn't not have enough raising agents as well. Ironically, I intentionally chose a recipe that doesn't require the use of baking soda, thinking that one less ingredient off the list makes things easier. I learned my lesson on that one.

I made a few batches and tried to incorporate some of the suggestions above. Not much luck as you can see. The last batch was hard as stones.

But, it's not all bad. Ethan seemed to enjoy eating them just as much he enjoyed helping me beating the mix. And DH said the taste is not too bad except they're a bit too sweet. 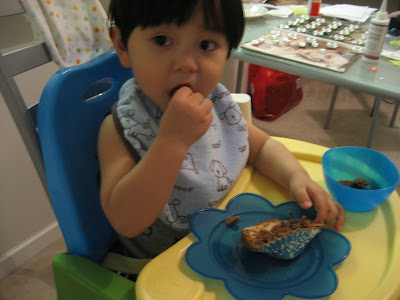 I was planning to give some to my friend who lent me the pan and so on. At the end, I chose not too. I think it's better if I helped her throwing these myself. They are edible (somewhat) but they're just not Cupcakes.

Let me end this post with something better and more memorable, a card that I made this morning.

Posted by Adorebynat at 8:00 AM