Ethan turned 1 (one) on the 18th of November. We did not have a big party. It's just a nice dinner at home with his grandparents, uncle and aunt, and his baby cousin. We actually had planned to invite friends and rent a room in a restaurant, but did not feel right about having a party soon after my husband's grandmother passed away. We then decided to use the monies to buy more presents for him.

Ethan's birthday was celebrated in 2 days. Opening presents and eating the cake had to be on the next day as he was too tired after dinner. Grumpy kid won't have a good time after all. So why pushing it? 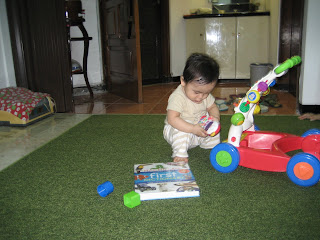 We ordered a cake with Pooh and friends theme but were a little surprised with how it turned out. There was misunderstanding that the colors were not really what we chose. We chose pastel colors and it's too late to make changes. It's still beautiful regardless and the taste was SO yummy. 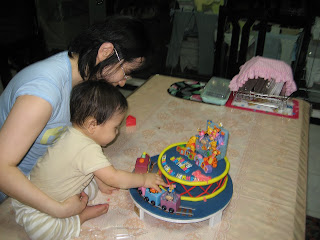 I'd been wanting to let Ethan ate the cake all by himself and let him be messy. However, it did not go as messy as I thought it could get. Somehow I let the voices surround me, "Don't let him eat the icing!" get to me and I kept taking the icing away from him as he picked them. Ohhh, I wish I didn't do that. The pictures would be more precious. :-(

Oh well, perhaps I shouldn't be too hard on myself. After all, what was actually happened is what matter to scrapbooked, right? It'll create a unique story itself.
Posted by Adorebynat at 1:56 AM